As promised, the hubby is back with another guest post for you guys!! This time he’s showing you what happened to the beer after we left off last time, and then sharing a recipe for some delicious beer cheese soup we made using our homebrew! (Side note- Hubby spent all night working on this post, only to have WordPress eat the whole thing! But being the AMAZING hubby that he is, he stuck it out and powered through draft number two so we could share this post with you today. Isn’t he awesome?!

Hello all, it’s the Hubby here. I just wanted to check back in and tell you about that Beer the Bean and I made awhile back, and then, share this awesome Beer Soup recipe we found (and altered- read: took out some butter, added veggies, etc.).

First off, when we last left our beer it was sitting in a primary fermenter. Life went on, fermentation completed, and I “racked” (siphoned) the beer into a secondary fermenter. This allows the remaining yeast to settle out of the beer and gives it more clarity. I also “dry hopped” our beer, which is when you add hops to the secondary fermentor to add more hop aroma. All in a days work. 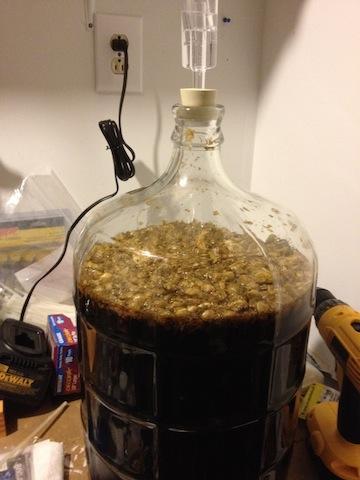 Next step, kegging time. I recently invested in some 5 gallon “corny” kegs (named after the Cornelius company that first produced them). They were originally made for pre-mixed soft drinks, but have been largely phased out in favor of “bag in a box” syrup that is mixed with cabonated water as it’s dispensed. This means there is an abundance of these kegs for homebrewers, and they are the perfect size! Also, I can tell you unequivocally that this is magnitudes easier than filling 50+ bottles. This is a big win for the Bean household. 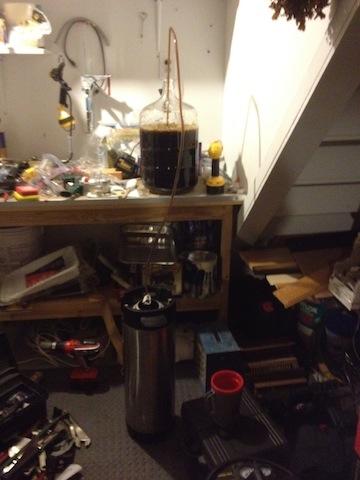 After siphoning the beer into the keg, I sealed it up and put it in my new kegerator… OK, to be honest, I stole the wifey’s basement freezer to use as kegerator. No booing! We have homebrew on tap now, it’s a small price to pay!

After hooking the beer up to a CO2 tank, the carbonation is forced into the beer, and it’s ready to enjoy in about a week. It turned out well! A nice balanced bitterness with a roasted finish. Mmmmm. 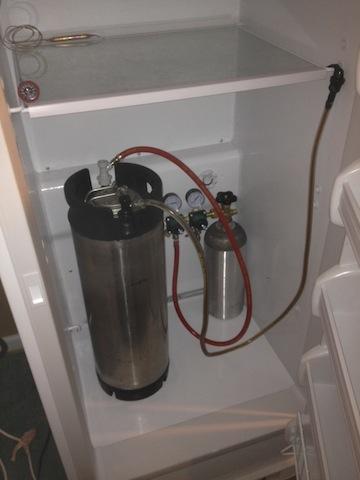 So then, my awesome wifey gets me DRAFT magazine, and I see this recipe for Smoked Gouda IPA soup, and I’m all “I just made a black IPA, let’s do this thing!”… and then I forgot about it for two weeks…. Then I saw the magazine laying on the coffee table and was like “No for real, let’s actually do this thing!” 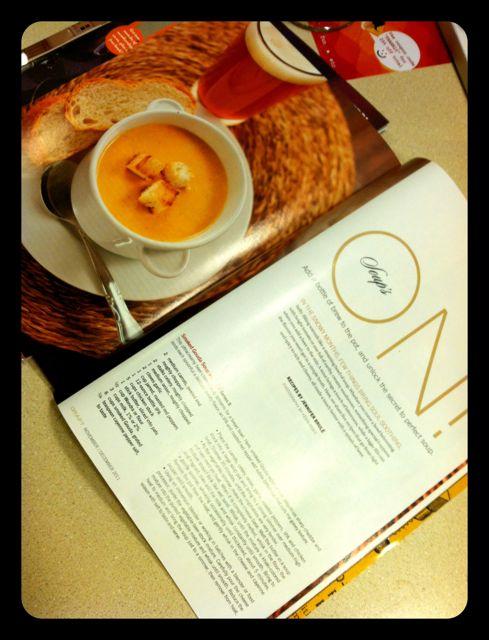 First step, I procured smoked Gouda. I happened upon a wedge-o-gouda at COSTCO and jumped on it. As you’ll see in the recipe, this bad boy will need shredded. A word of warning- CHEESE GRATERS ARE EXTREMELY DANGEROUS- PROCEED WITH EXTREME CAUTION! I was blazing through the job, making tremendous progress, but then grated my thumb… Don’t do that. You won’t like it. 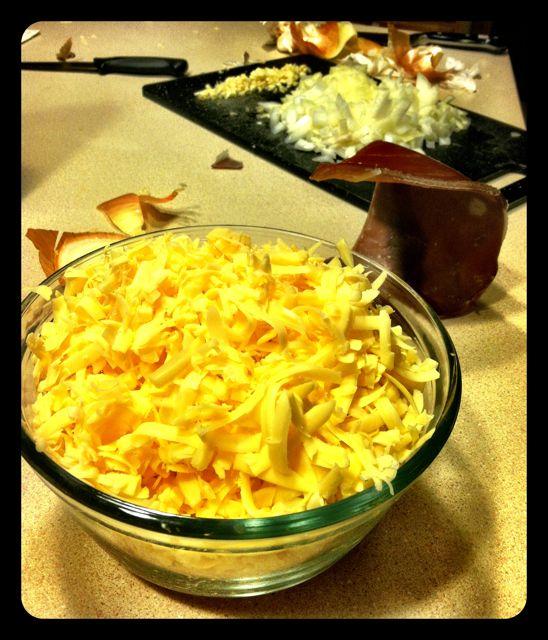 Anyway, here’s how we did it up:

1. Heat the olive oil in a large pot over medium heat.

2. Add the red pepper, potatoes, garlic and onion and saute for 10-15 minutes.

3. Add the vegetable broth, bring to a boil, then reduce heat and let simmer for 20 minutes.

5. Slowly whisk in the shredded cheese. Stir until the cheese is melted.

6. Pour the cheese mixture into the soup and stir to combine.

7. Slowly add the beer, stir and let the soup simmer for a few minutes to thicken. Serve warm!

The orginal recipe was liquid only, but I like a big and hearty chunky soup, so I got to choppin’. Red potatos, red peppers, and onion were the perfect addition. I handled the knife very carefully after my cheese grater accident, and then threw all those veggies in to a stockpot with some veggie broth. 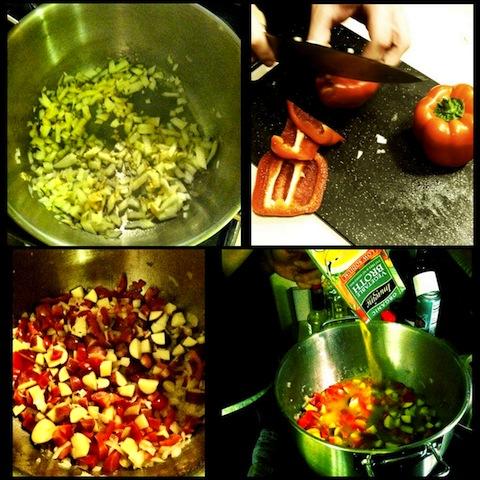 After getting the milk, butter, and cornstarch mixture together, I took it off the heat and started working in that GOUDA. It takes a lot of stirring, but you’ll end up with a nice, creamy mixture. 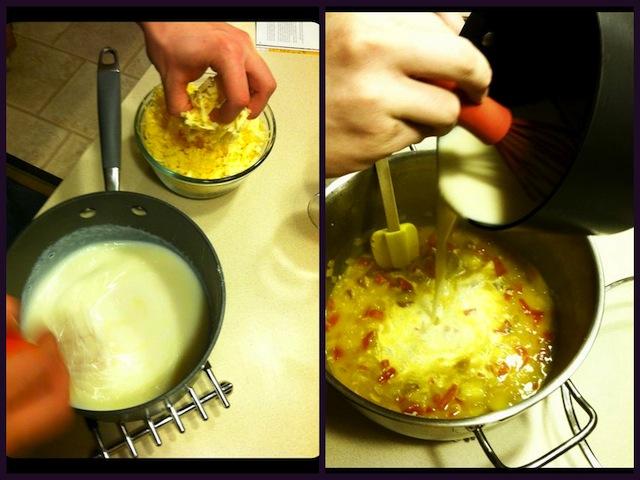 Last, but certainly not least, you need that IPA! Just a quick lesson for those non-beer-nerds. IPA stands for India Pale Ale. This is a very “hoppy” (bitter) style of beer that was first brewed in England for export to India. Hops are a natural preservative, so the extra hops helped the beer make the trip. Nowadays, Americans have fine tuned this style and you can find many delicious options at the store. 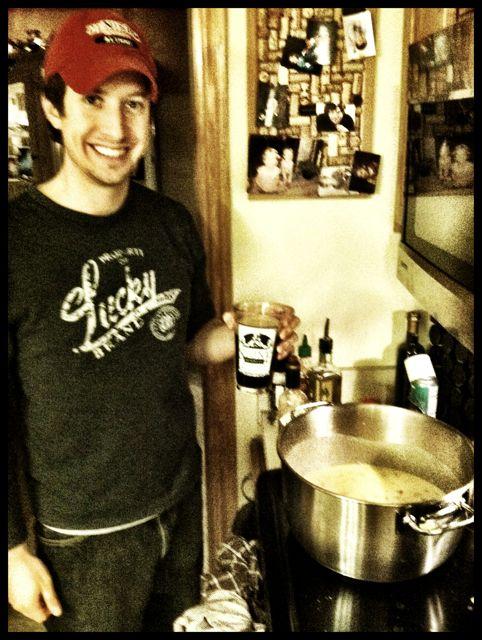 For my soup, I opted for our homebrew- this batch has been dubbed “Black Lab IPA”. I could also recommend that “Ruination Ale” from Stone Brewing Company would probably be really good in this soup as well. I’ll probably try that next time. 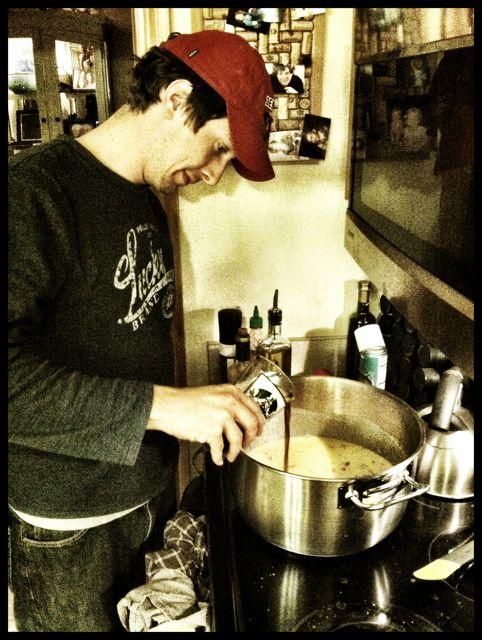 Enjoy it with a beer! This turned out to be a great hearty soup, perfect for a cold day. However, enjoy in moderation, because eating a block of Gouda probably isn’t the healthiest thing you can do. 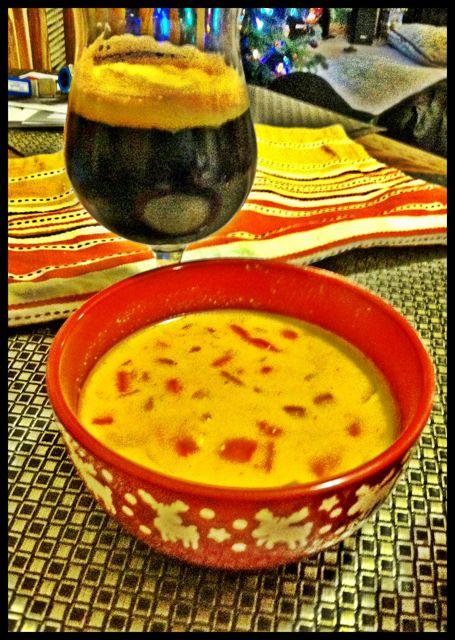 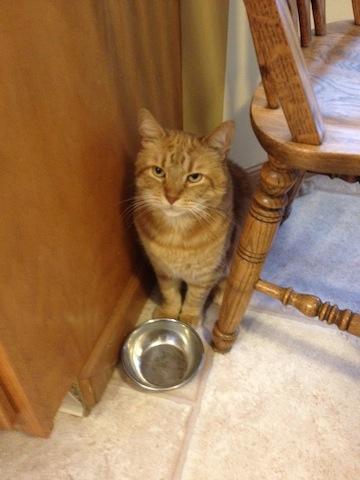