Real life post alert.  I’ve been in a bit of a funk for the past week or so. There have been some large events and some small events and together they’ve left me feeling allll the emotions – anxious, stressed, conflicted, sad. I’ve been trying to find the words to describe how I’m feeling and haven’t had much luck. In fact, on three separate occasions yesterday I opened up Instagram stories to chat with you guys about it but I held back.

And then at 8pm last night, I finally sat down for the day to read blog posts and I read Julie’s post – One of “Those” Days – and you guys, it was like I could have written the freaking thing myself. She writes, much better than I ever will, about how sometimes it’s difficult as a blogger to share about the average days. The ones that aren’t good….but aren’t horrible…they’re just blah.

A lot of times it’s easy to talk about bigger events. 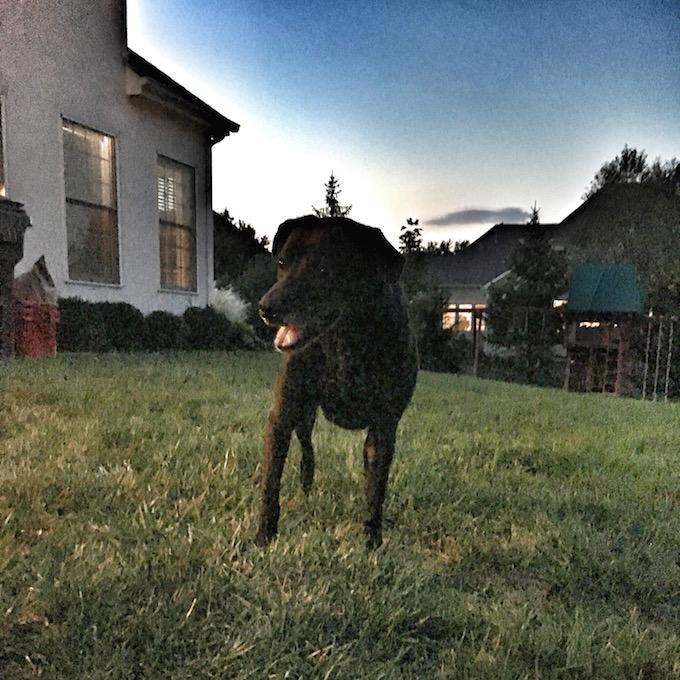 There have definitely been some big events in the past week. As some of you may know, last Wednesday we had to put down one of our dogs. While I had lost childhood pets, this was the first time I’d lost one of “my” pets as an adult. We got him when he was 3 months old and had him for 9 years. And you guys, it hurts. So much more than I ever thought it would. I struggled with everything from the expected things like missing him greeting me when I came home and having to explain death to my almost 3-year-old, to the unexpected things like mistaking our black laundry hamper for him out of the corner of my eye. 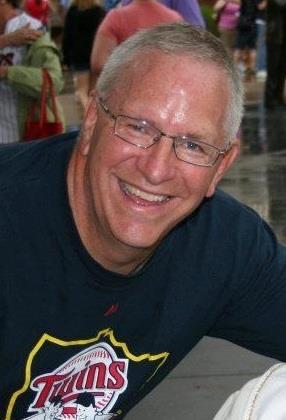 And then, on Sunday, my uncle (and godfather) passed away after a short battle with cancer. He was only 60 years old and my cousin, his youngest daughter, is getting married in two weeks. My heart aches for her (and the rest of their family) in a way I can’t even explain. His funeral is taking place on what would have been my aunt and uncle’s 38th wedding anniversary.

Those are big things. They’re sad. They’re messy. But they’re easier to write about.

Then there are the little things. The things that may seem big in the moment…but in the grand scheme of things, really are small. This week has been full of them.

Like that fact that Monday was seemingly endless. It involved a myriad of errands that were made infinitely more difficult by the fact that I had to drag two kids along with me and get both of them in and out of their car seats 100 times. And then both kids spent the afternoon taking turns screaming at the top of their lungs and I got no work done. Those days are hard.

But you know what’s also hard? Being someone who desperately wishes they had those two screaming kids to tote around.

Or the fact that on Tuesday, I was rushing around running errands to get ready to go out of town for the funeral and feeling slightly panicked about taking my kids on a plane for the first time. That was stressful.

But you know what’s also stressful? Having to deal with the fact that your dad just died. 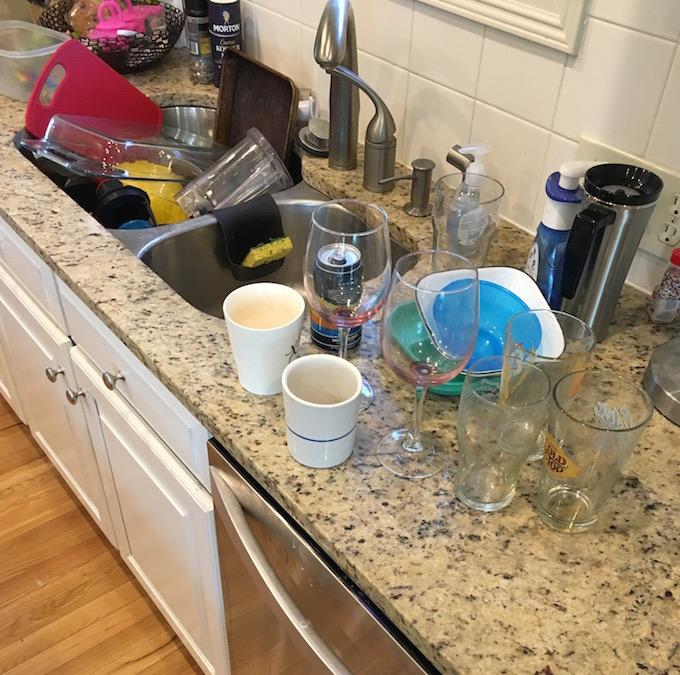 Or the fact that I’m annoyed that my house seems to constantly be a mess, no matter what I do. And I can’t keep up with the dishes or the pet hair no matter how hard I try. It’s a never-ending battle.

But you know what else is a battle? Every day, for all the people in Texas and Florida who don’t have houses anymore right now thanks to the hurricanes. 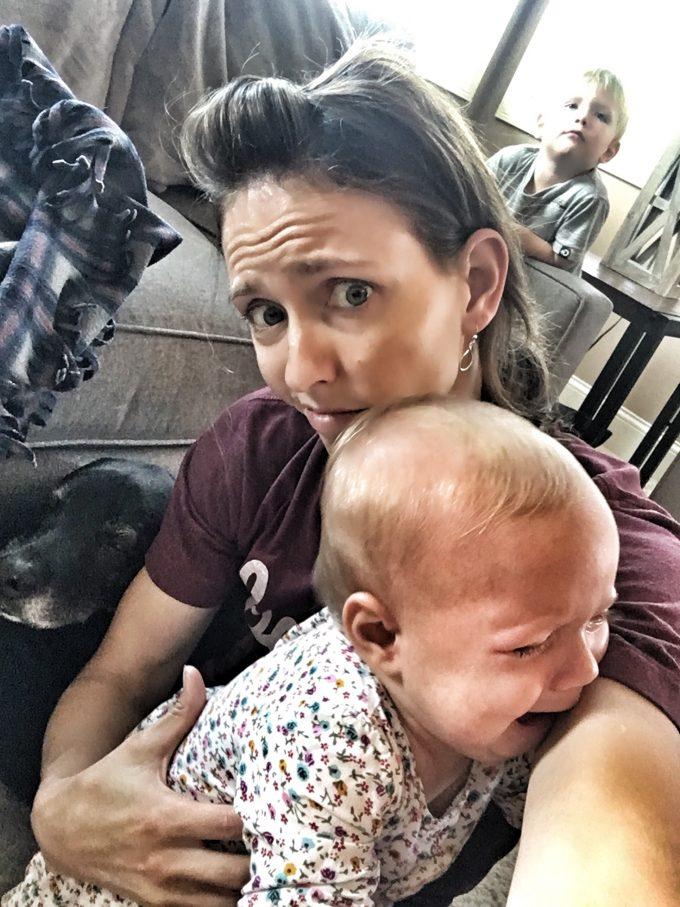 I’m not exactly sure what the point of all this is other than here’s the thing. Having hard days is normal. Everyone’s life is messy.

My kitchen constantly has enough dishes lined up to fill the dishwasher again before I even get around to emptying the clean ones. My entire house is covered in pet hair. On any given day there are 3 days worth of cups, cans and bottles on the end tables in my living room. Our playroom so messy you can barely walk through it, but most nights I go to bed without cleaning it up because…what’s the point?

At least once a week I go two days without showering and wear the same shirt. And sometimes, after a long day, when the baby is finally sleeping, I put on the tv for my wild and crazy toddler and hope that I can fall asleep for 5 minutes in the chair next to him.

Most days I question my ability to be a good mom at least once. 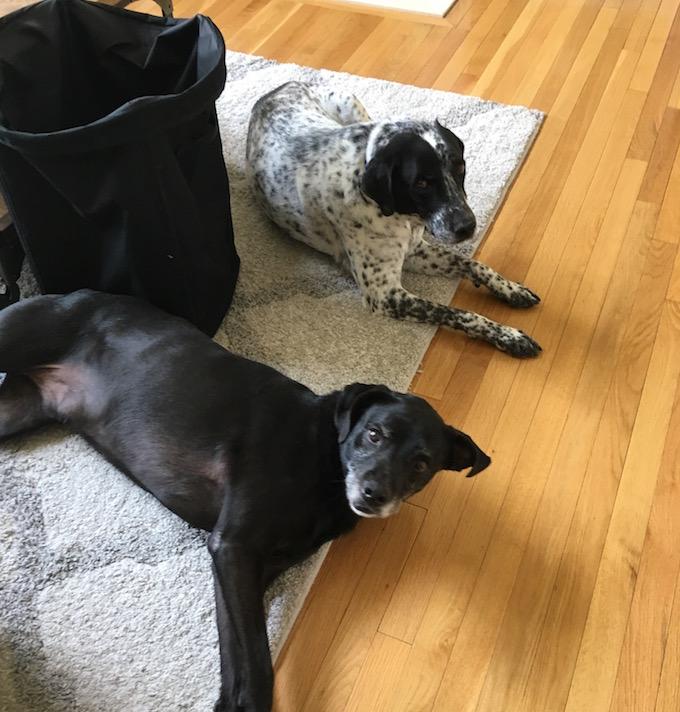 That doesn’t mean that you can’t have rough days. It doesn’t trivialize your problems OR theirs. I live in Ohio, where we’ll never be directly hit by a hurricane. I can sympathize, and go to Costco and stock up on supplies to help those who have been hit by one, while still struggling with the fact that my own house can be overwhelming at times.

I can love and support my family through the loss of a loved one while still getting stressed about taking two young kids on their first and second plane rides. And I can have hard days with my kids while still empathizing with those who are struggling to have kids of their own.

Me struggling with stuff in my life does not trivialize what is going on in the lives of others. 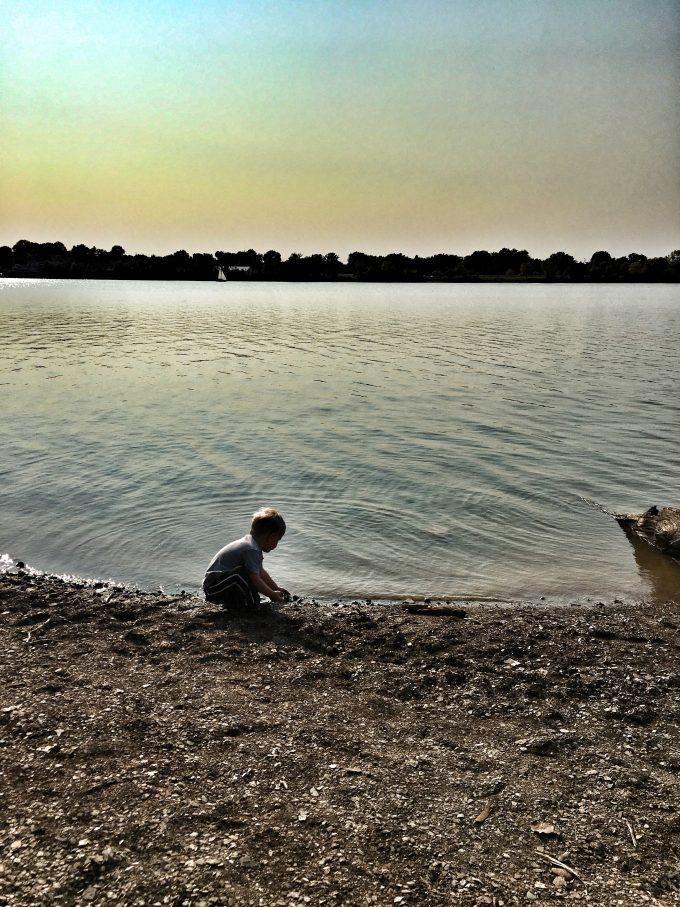 But the fact is, the circumstances of others don’t change mine. We can all have hard days. And we will.

And in the end, all you can do is your best. So I’ll continue to try to be the best person I can be. I’ll choose to focus mostly on the good and work hard to embrace the things I have control over and accept the things I don’t. I’ll support those around me who are struggling and also acknowledge my own struggles.

We’ll be back to regularly scheduled programming next week. I promise I have at least 3 recipes tested and photographed, just waiting to be shared. But for now, this is me writing out what I need to hear…and sharing it with all of you in hopes that it will bring comfort to someone else as well.