A look at what my toddler chose to eat versus what I served him at each meal for a week. 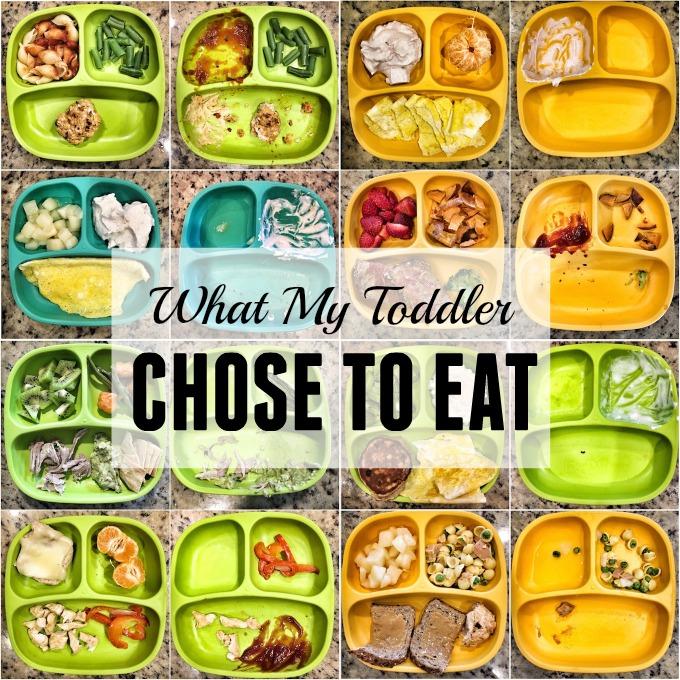 A couple weeks ago I shared this 50 Healthy Toddler Meals post where I showed you guys some of the meals I’ve been serving Squish lately. Today I thought we’d do something a little different. Whenever I share his meals, I get a lot of comments about how much he eats and what a good eater he is. Yes, he is a good eater…but before we get into today’s post, there are a few things I want to point out:

Am I worried about it? No. 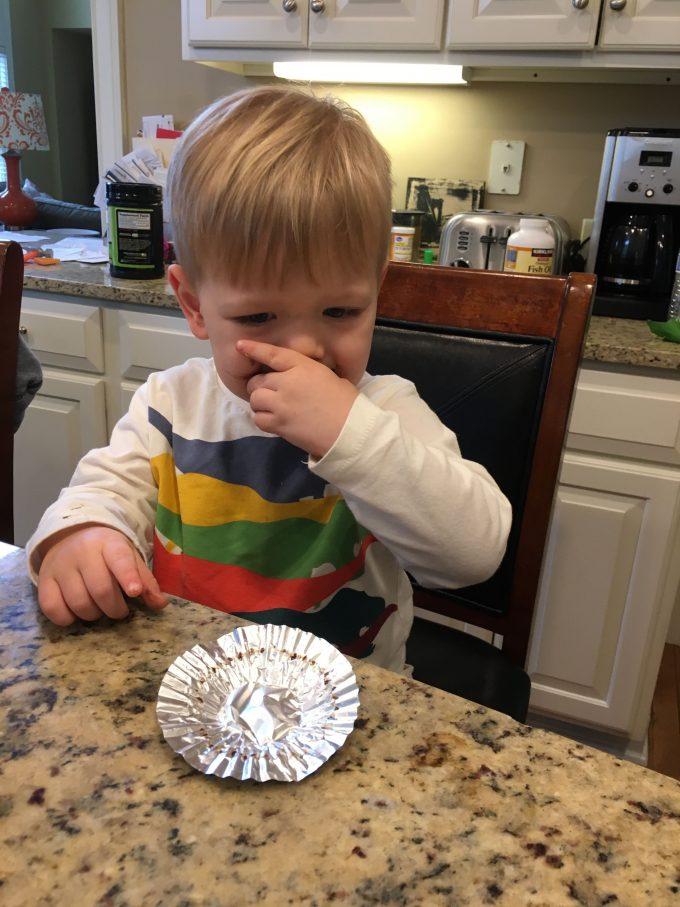 I view it as my responsibility to serve him a variety of foods at meals and snacks (that includes things like cookies and donuts) throughout the week. It’s his responsibility to decide how much of it to will eat. If you’re familiar with Ellyn Satter’s Division of Responsibility, you may recognize this philosophy.

I do my best to serve him a good mix of fruits, veggies, lean proteins, whole grains and healthy fats. Some days he eats well, some days he doesn’t. He has his favorite foods (pretty much any fruit, yogurt, cottage cheese, cookies etc) and foods he’ll spit out pretty much any time I serve them (green beans, peppers, peas, etc). That doesn’t mean I stop serving them. I continue to put different meats and vegetables on his plate, in a variety of different forms, so that he’s exposed to them.

And it can be hard…and frustrating….and a lot of times I want to take the easy way out and just give him things I know he’ll eat….but one thing I’ve learned is that every time I want to give up, he goes and does something that surprises me like grabs a raw carrot to crunch on while watching TV or eating a whole floret of broccoli unprompted.

And it inspires me to keep doing what I’m doing! So here are his meals from last week: 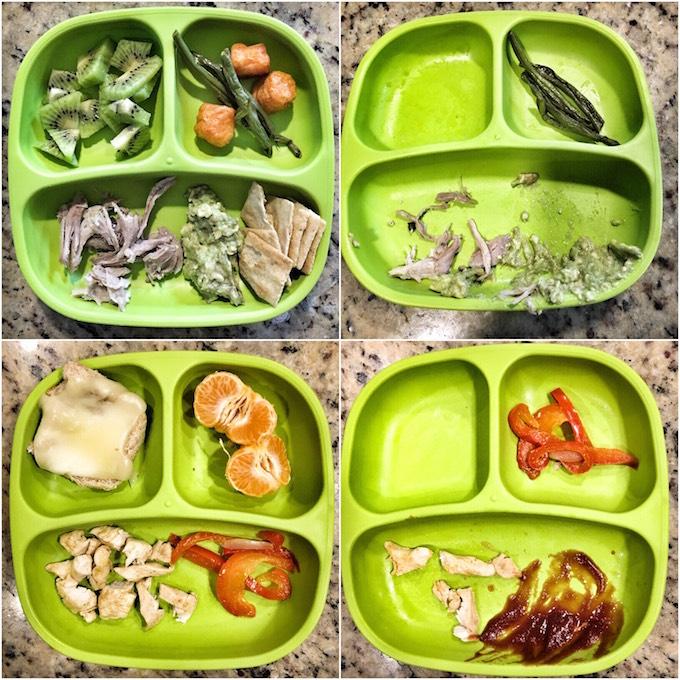 He ate most of the pork, all the crackers, the sweet potato puffs and all the kiwi. I ended up giving him the second half of the kiwi and some extra guacamole as well. 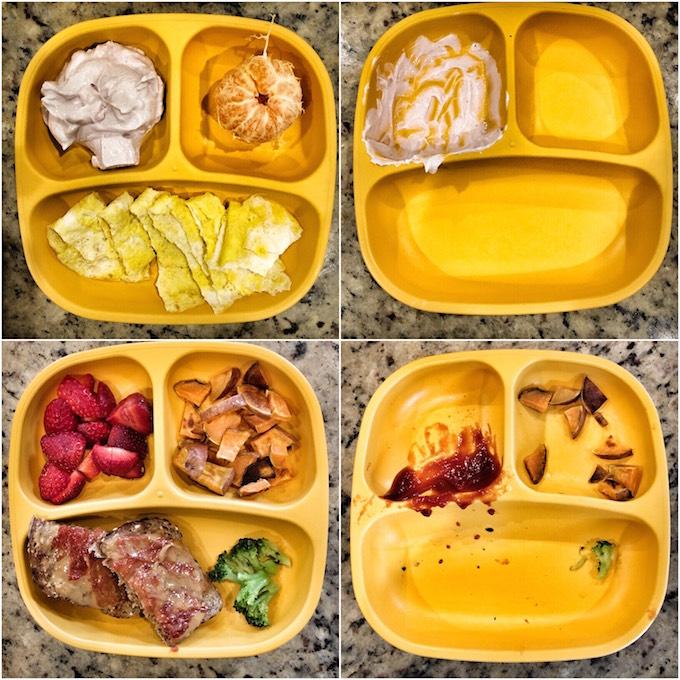 Tuesday Breakfast: Siggis 4% Whole Milk Blueberry yogurt + clementine + an egg wrap (he likes them cold so it’s easy to make them ahead of time and just pull one out in the morning)

He ate it all. He very rarely leaves anything behind at breakfast.

He ate everything except a few sweet potatoes. I gave him some ketchup to get him to eat the sweet potatoes and he surprised me by trying the broccoli on his own and then eating the rest of it, no dip needed.

He tried a green bean, spit it out and left the rest. He ate about half of the salmon cake and I gave him some hummus. However before this he also ate about 4 carrot sticks dipped in hummus while I was getting dinner ready.

Proud of my little carrot eater! This is my go-to snack while making dinner. Proof they’re always watching!

He ate it all and about halfway through, daddy came home with a donut for me so I gave about 1/4 of it to Squish. 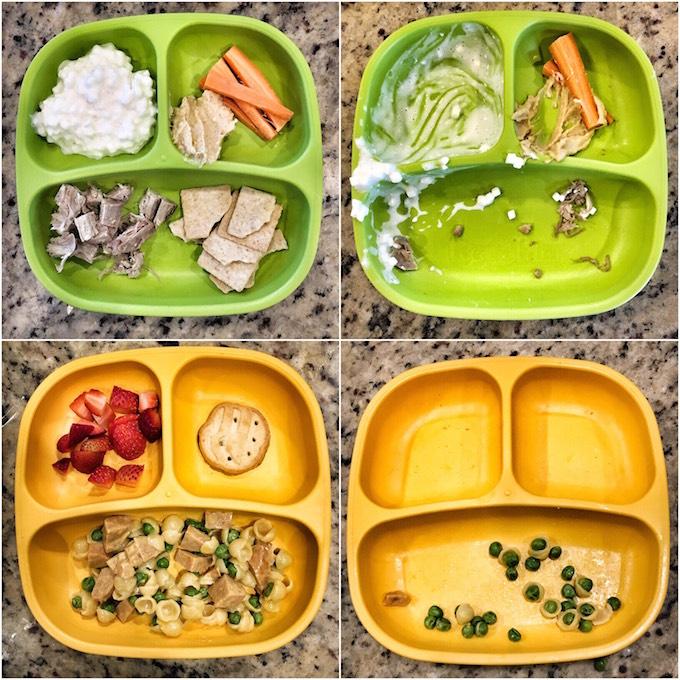 He ate most of it but left a few of the carrots.

He ate the berries and cookie, then tackled the mac and cheese. He ate all of the sausage pieces with a fork. He pulled the peas out of the shells, stuck the shells on his fingers one by one and ate them that way and left most of the peas. 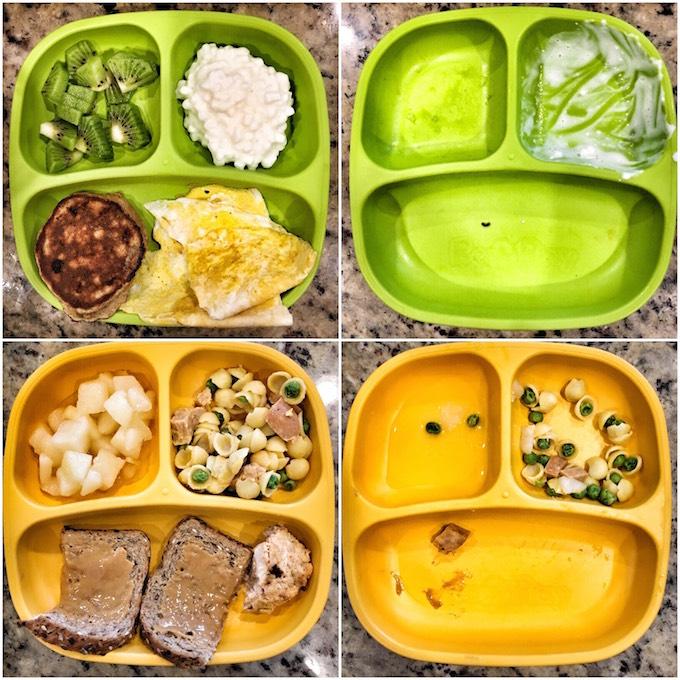 He ate it all without any trouble.

I actually replaced the salmon cake with a slice of turkey because I forgot that I’d promised him a turkey sandwich in the car on the way home. He ate it all except some of the mac and cheese.

Thursday Dinner: We went out for Mexican. He ate several chips and salsa while we waited. I ordered him a chicken quesadilla with half the amount of cheese and a side of applesauce. I took one of the 4 quesadilla slices away because it was pretty much empty and he dropped about half of one on the floor but ate the rest. 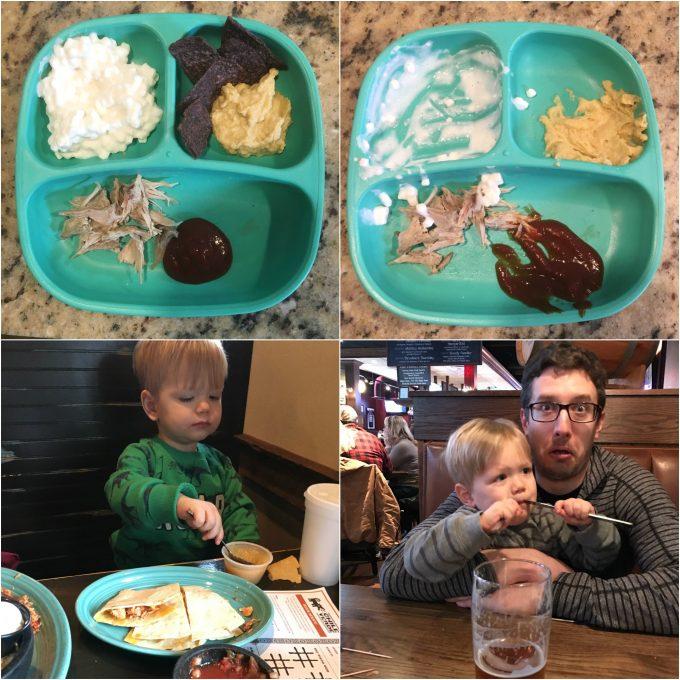 Friday Breakfast: Fruit + yogurt + egg. He ate it all. I didn’t take a picture.

He pretty much just ate the cottage cheese and chips.

Friday Dinner: We went out to dinner. We ordered shrimp as an appetizer and I got him chicken fingers with cottage cheese for dinner.

He didn’t eat any of the shrimp. He ate one chicken finger and all cottage cheese…I forgot he’d also had it for lunch.

What’s your biggest struggle when it comes to feeding your kiddos?