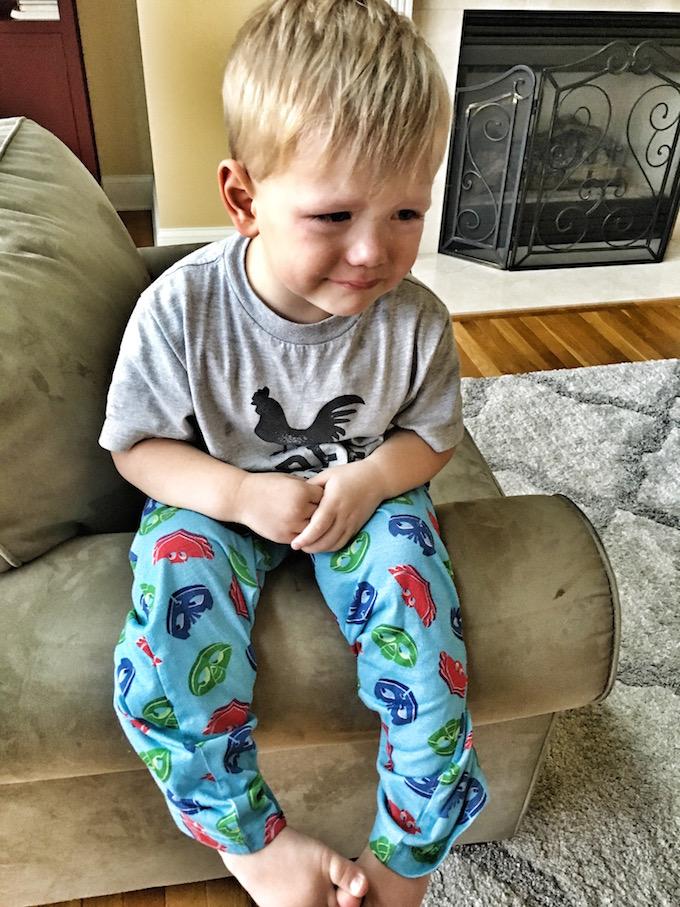 This age, you guys, it’s hard. It’s tantrums and yelling. It’s hitting and kicking. It’s no, no, no and then no some more. More days than one, it will push you past the limits of your patience and leave you questioning where you went wrong as a parent. But when you find yourself having one of those days, remember this: It’s ok to take a mom timeout, hide in your room and just breathe. And it’s ok to cry right along with them. (I’ve done both today) It’s ok to question yourself, but never ever doubt these two things 1) Your little ones love you unconditionally and 2) You’re doing a great job. I promise ❤️

I snapped this picture about halfway through a particularly rough day and I was just about at my wit’s end. I was mostly just writing out the reminder that I really needed to hear…but your responses reminded me of something so important:

I am not alone. There are so many of you out there who have either been here yourselves or are currently in the thick of it with me. 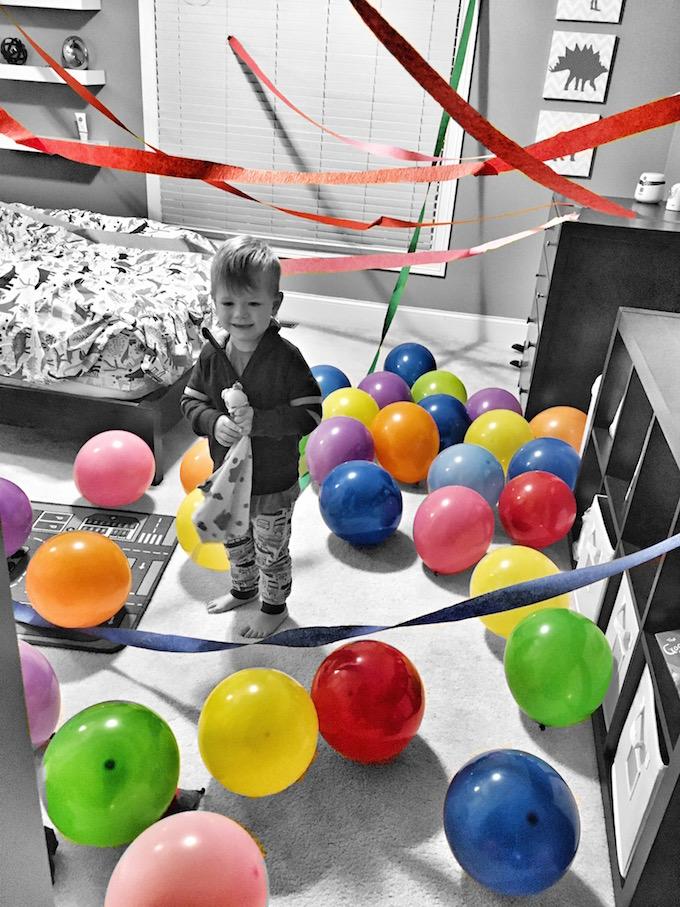 Last weekend Squish officially turned 3. I can’t believe it’s been a year since I last wrote a post just about him. To document this birthday, I decided to try to capture a completely honest look at what life with a three-year-old is really like. 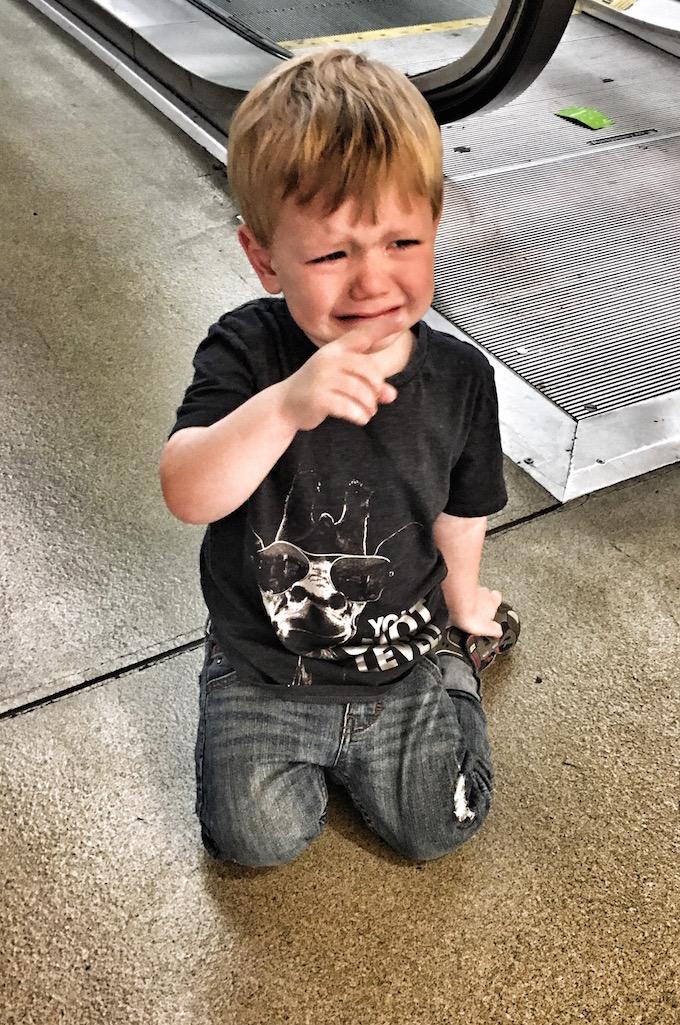 Three is emotional. It’s mood swings. It’s tears. So many tears. When he hears the word no? Tears. When I have to change his diaper? Tears. When I won’t give him a snack 10 minutes after he finishes lunch? Tears. When we have to leave the playground? Tears.  Every day when he comes in to wake me up, I hold my breath and wait to see what kind of morning it’s going to be. And even when it starts out well, things can change in an instant. Happy. Screaming. Pouting. Happy again….all in a small five-minute window. And repeat. All day. Every day.

Three is frustrating. It’s a constant exercise in patience and trying not to lose it. I consider myself a fairly patient person…but it seems like there is at least one point in every single day lately where I raise my voice, lose my temper or become completely exasperated, no matter how hard I try not it. I do my best to put myself in his shoes and be sympathetic and understanding and calm but sometimes it’s just not possible. 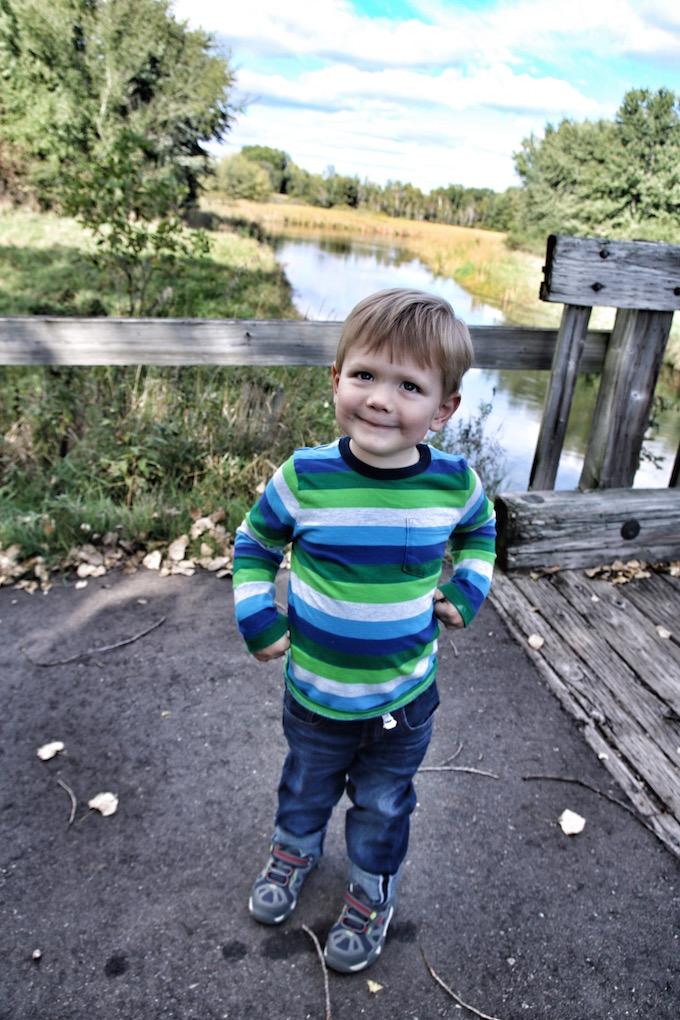 Three is defiance. It’s pushing boundaries, often with a smirk or a smile because they clearly know it’s wrong and they’re just testing your limits.  It’s hearing the word NO at least 100 times a day, to pretty much every question, often before you’ve even gotten the full question out of your mouth. It’s being forced to pick your battles and learning when to stand firm and when to give in.

Three is repetitive. Don’t hit. Don’t kick. Indoor voice please. Get in your carseat. Leave your sister alone. Calm down. Put your shoes on….All things I say a million times a day. 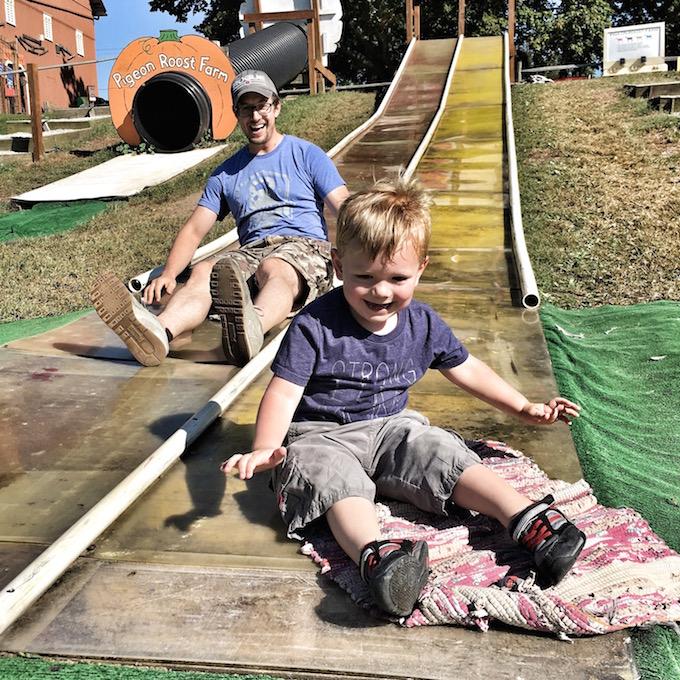 Three is loud. And fast. It often seems that Squish only has one speed and one volume. Fast and loud. From literally the second he wakes up until the minute he goes to bed.

Three is independent. “My doin’ it” is his number one phrase. Everything from putting the ice cubes in his water bottle to climbing in and out of his car seat. It’s messy and painstakingly slow at times, but his confidence and skills are developing, which is so important. 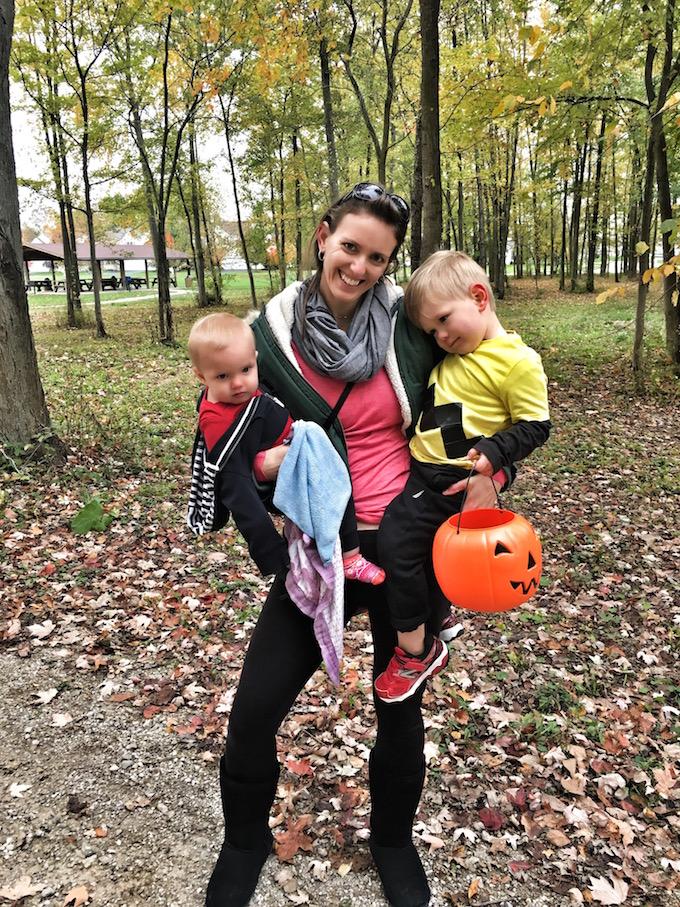 Three is low expectations. It’s making grand plans, only to have them constantly derailed by a toddler who wakes up on the wrong side of the bed. It’s disappointment, rejection and canceled plans.

Three is hard. And exhausting. At the end of every day, I literally collapse into bed. It’s by far the hardest year so far.  Never have I doubted my ability to be a parent more than I have the last few months. I’ve felt unqualified, embarrassed, scared and defeated. Usually at least one of those emotions every single day. So many times each week I find myself thinking “ok, well how the F am I supposed to handle this?”

But three is also amazing. 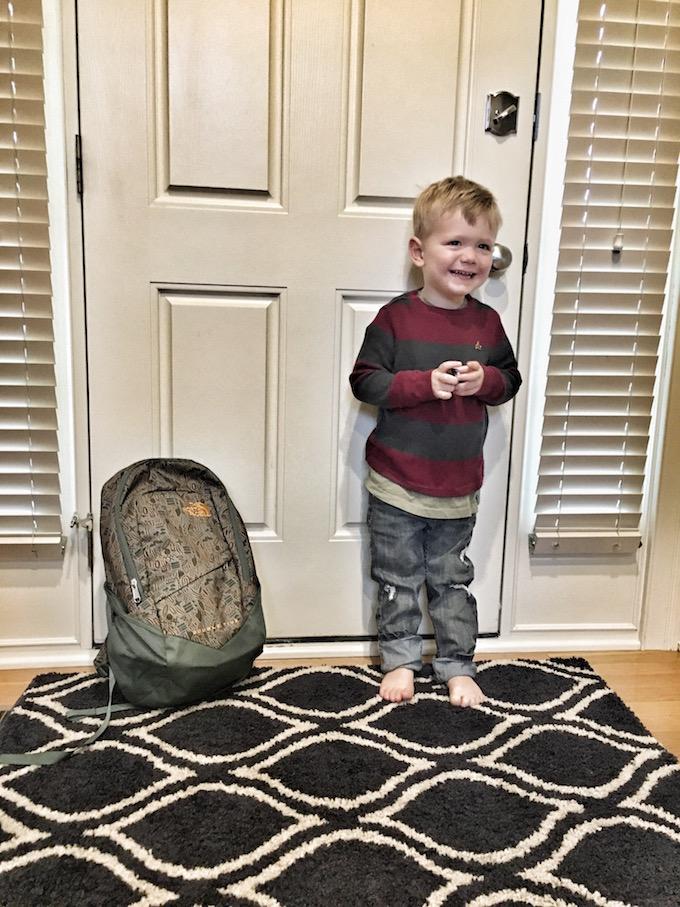 Three is new. It’s new activities, new words, new interests. Since he started talking fairly late, it’s been so fun to watch him learn new words, start communicating more clearly. He also started regularly going to preschool and playgroup so he is interacting with kids his own almost daily.

Three is impressive. The things he remembers and the things he can figure out continue to astound me. He has an amazing memory and sense of direction (def got both of those from daddy) and every day I’m impressed by how smart he is. 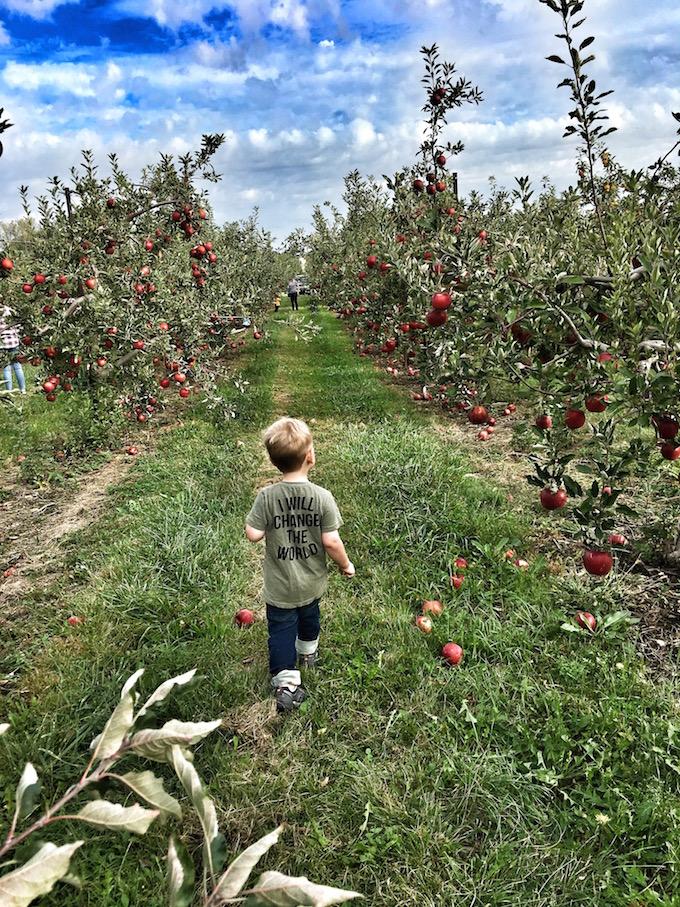 Three is hilarious. The things that come out of his mouth make me laugh SO HARD.

Three is pure. There’s nothing better than seeing the world through the eyes of a child. He’s discovering new things, having fun and loving life without yet being corrupted by the current state of the world. Seeing the pure joy on his face when he does something fun is so amazing. 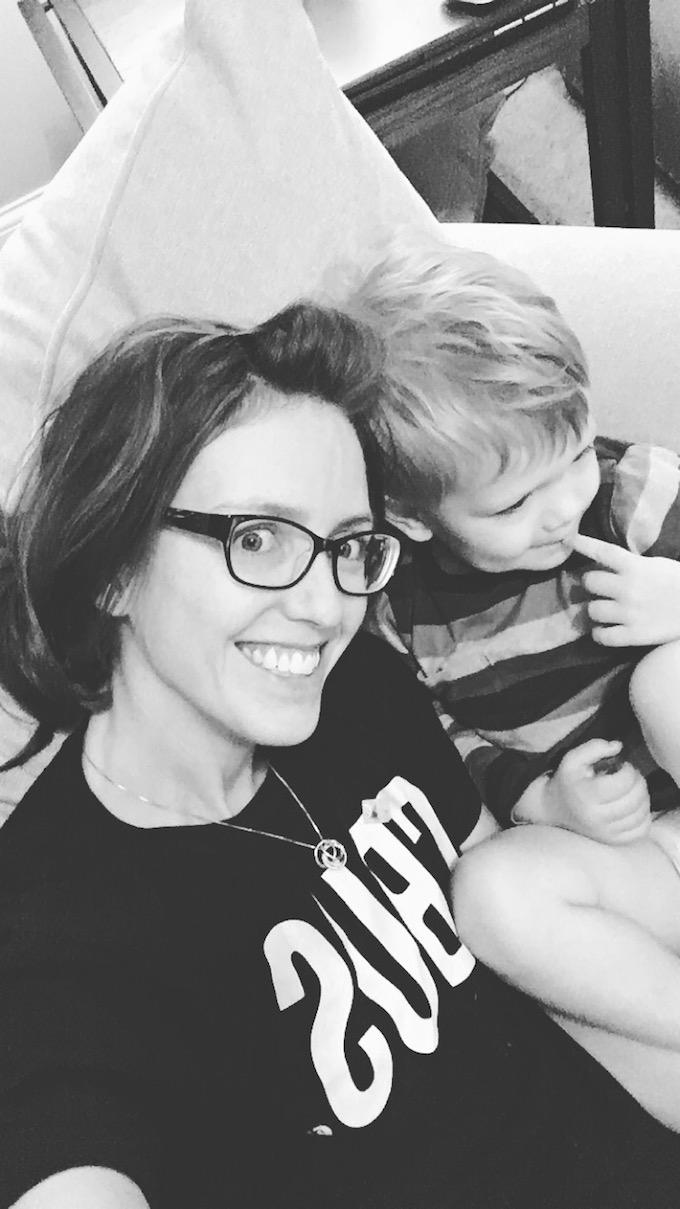 Three is unconditional. Squish has always been a mama’s boy and it continues to be oh so humbling to have someone love me so fiercely. No matter how frustrated I get with him, at the end of every day he gives me a hug and says “wuv you mommy” and I know he means it 100%. We are his whole world and I never take that for granted. 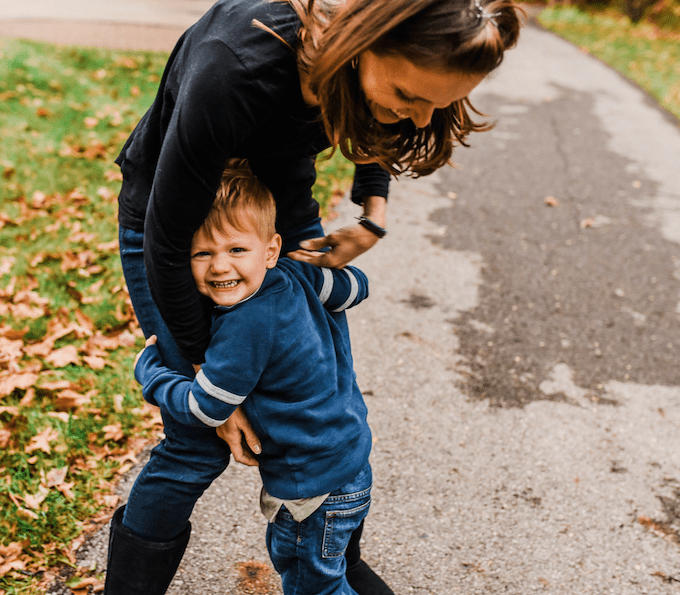 Nothing makes me happier than being his mama. Even if it is the hardest thing I’ve ever done.

So to all my fellow parents out there, if you’re currently in the “this is three” stage as well, hang in there. Remember that this too is just a stage. They’re learning and growing, just like we are as parents, and we’ll all make it out the other side.

Remember that it’s ok to get frustrated and cry right along with them. No matter how it may seem at the end of every day, you’re doing a great job.