I have two weeks worth of workouts to share with you guys since we skipped Fitness Friday last week! 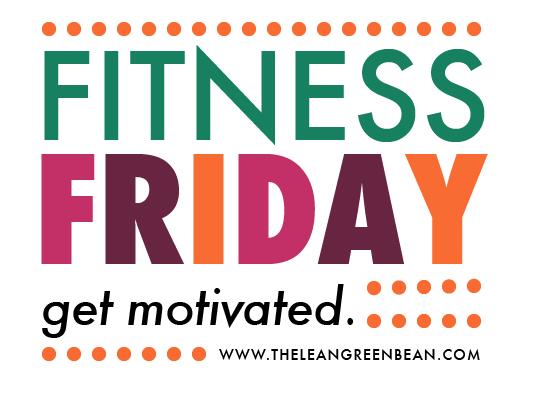 So let’s back up to two weeks ago: 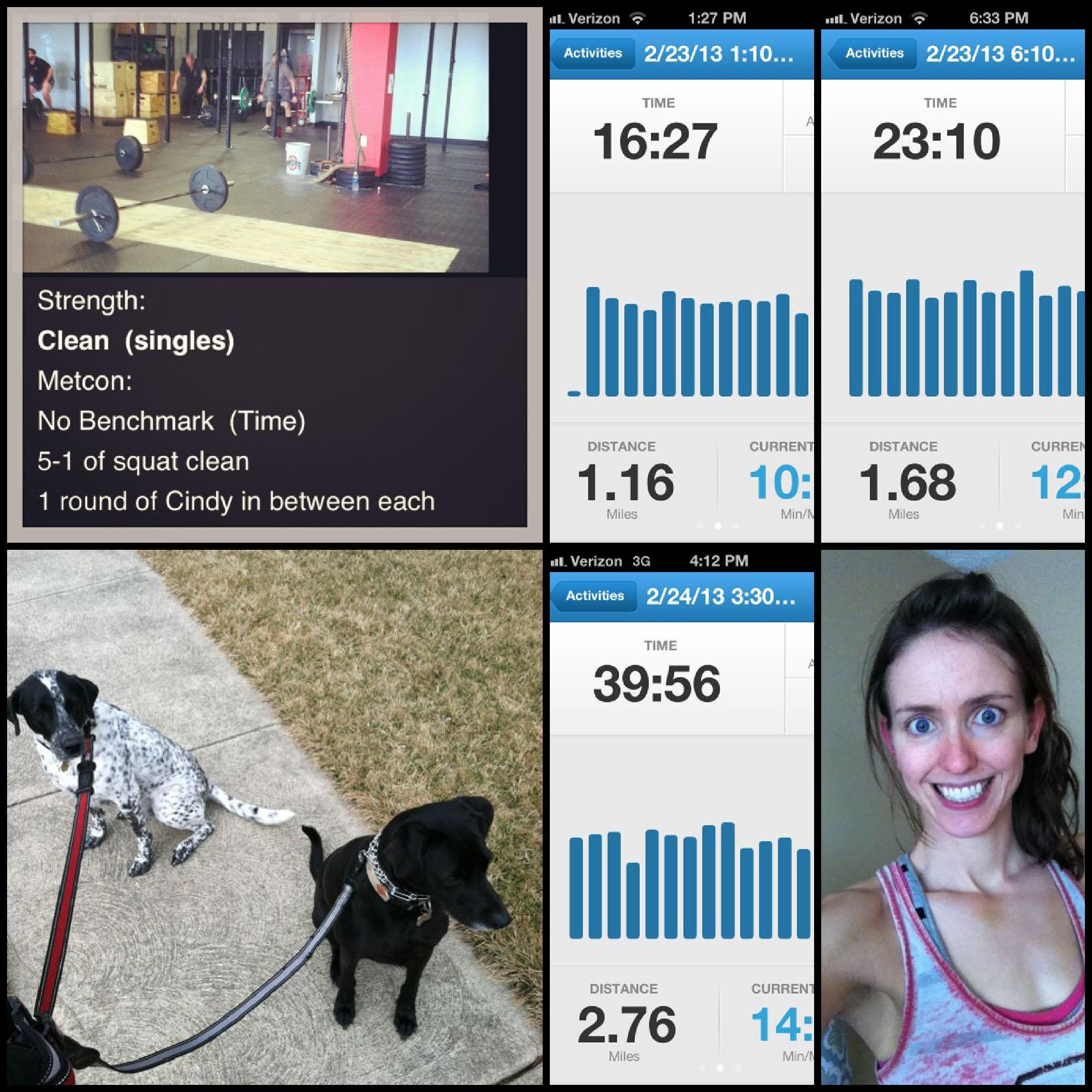 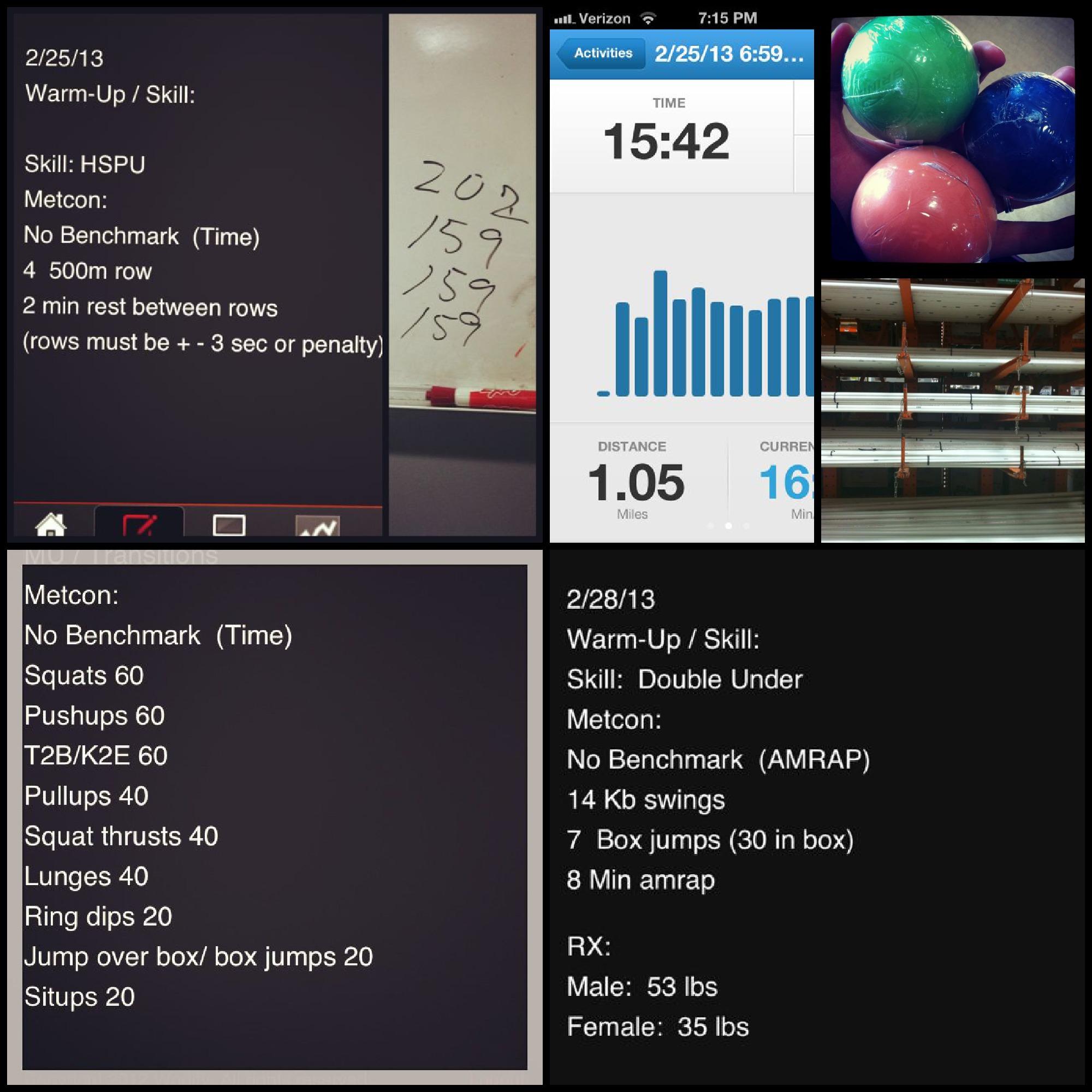 1. Monday: We worked on handstand pushups. I’m trying to get the hang of kipping handstand pushups but it’s not going so well 🙂 For the wod, you had to row 500 meters, 4 times and all your times had to be within 3 seconds of your first time. This wod was easy for me. I rowed in college so I know how to pace myself. I knew I could probably pull sub 2 but gave myself a little leeway on the first one and finished in 2:02. Then I pulled 1:59 for the next 3.
2. We also took the boys on a walk and tried out the new toys we bought over the weekend. We got some lacrosse balls, which you basically roll around on to help loosen up your muscles. It’s super painful, but it helps. We also bought a pvc pipe so we can work on our form for some of the olympic lifts.
3. Tuesday: This wod was seriously rough.  I finished in 23:10. Worst part was toes to bar, by far. I struggle to get like 10, so 60 of them in a row is pretty much ridiculous…and then having to do 40 pullups after that really sucks.
**Wednesday: Rest day**
4. Thursday: Crushed this one!  I did 8 rounds + 14 and used a 24 inch box! For the skill we did double unders and also worked on pullups. I finally figured out how to string together 5 kipping pullups! Previously I could never get more than 2-3. 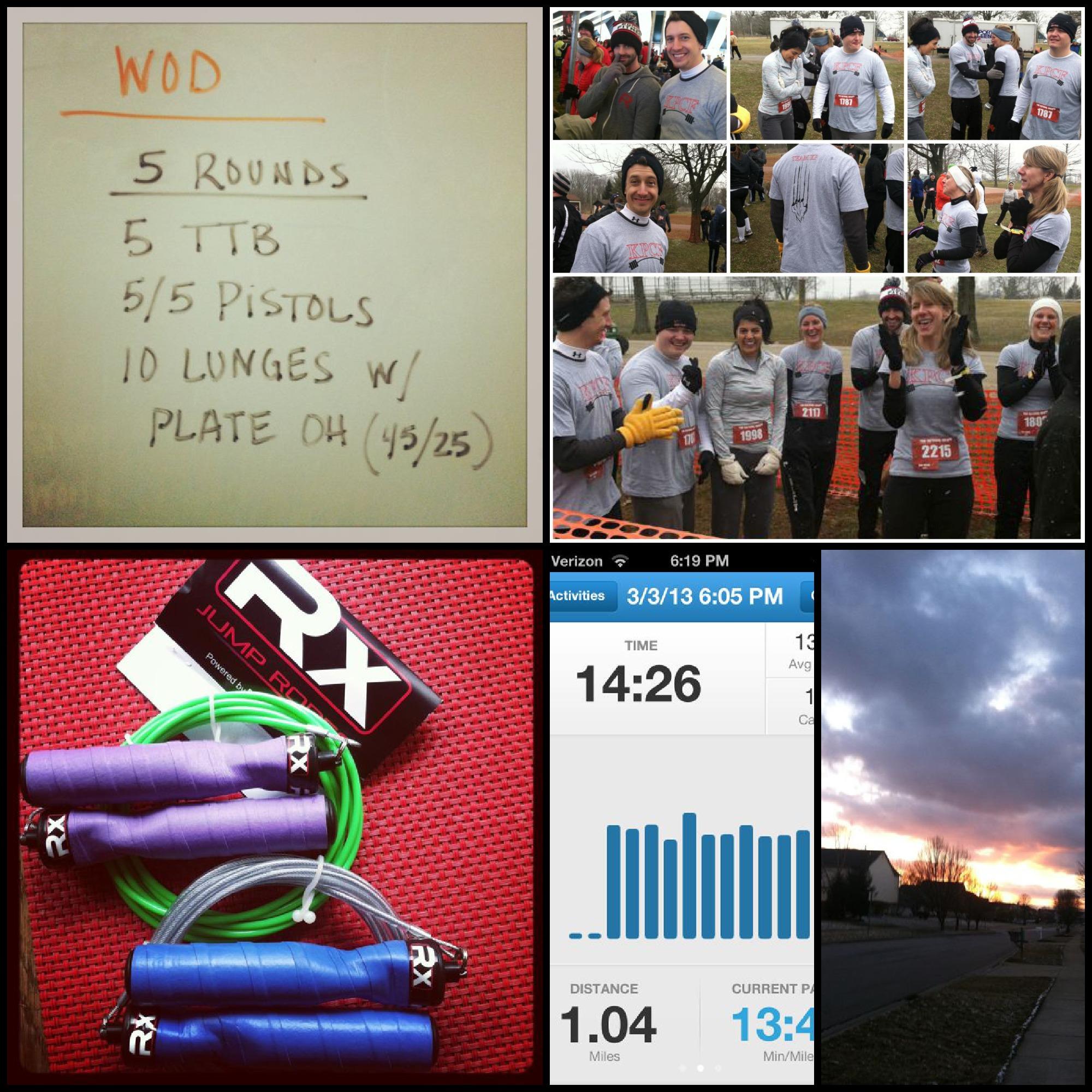 1. Friday: We both had the day off so we went to our first ever morning WOD. We also went back to our old box which is now open again! The WOD had toes to bar, which I hate, and pistols, which I love 🙂 I did this one Rx and finished in 8:13. Loved it!
2. Saturday: Hubby ran the Survival Race 5k. I decided not to run last minute because my foot has been bothering me and I was worried about the uneven ground. Turns out I made a good choice- one of our friends ended up with a stress fracture after the race and has to wear a boot for 3 weeks!
3. We got new jumpropes!
4. Sunday: A little sunset walk with the boys. 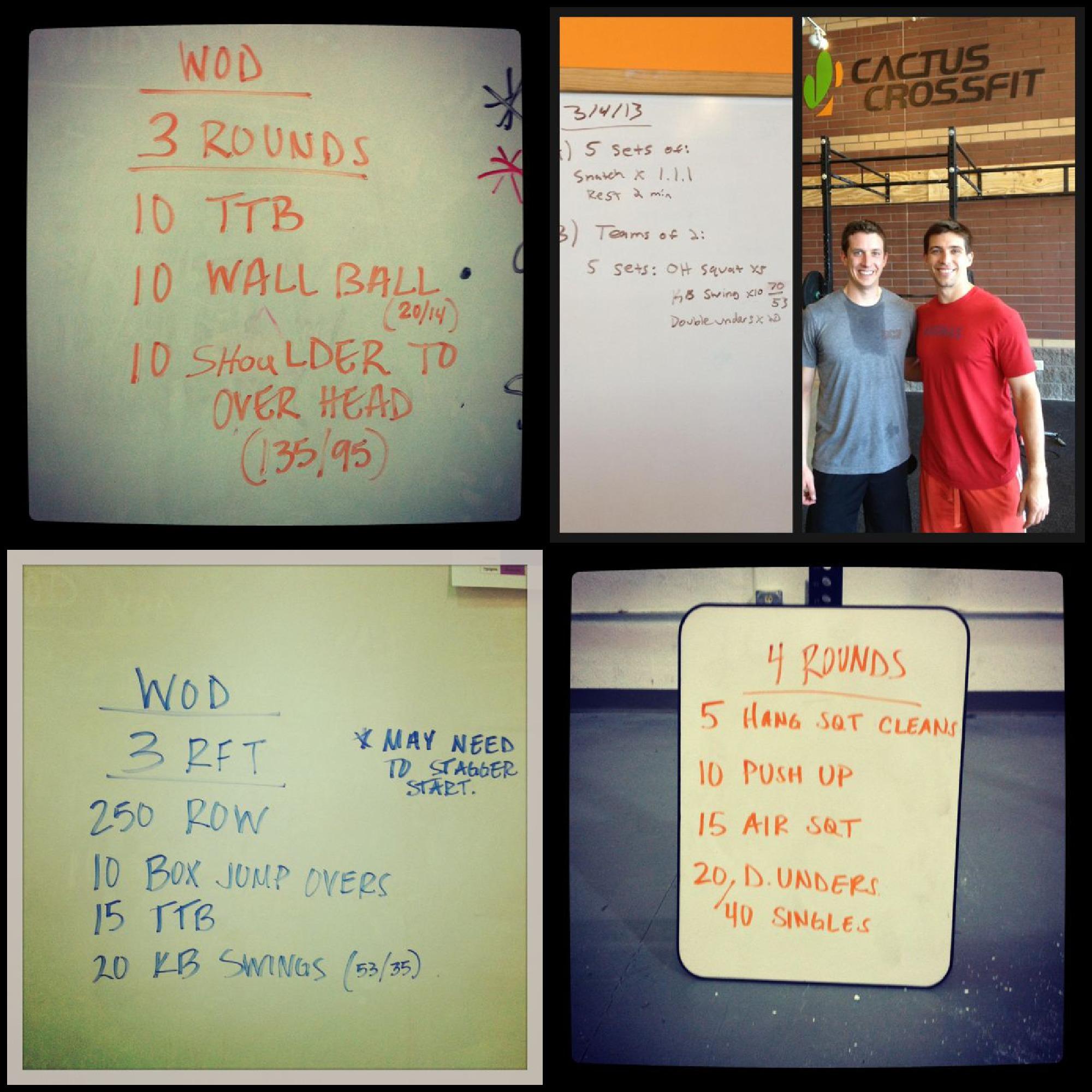 1. Monday: More toes to bar (gag me!). For skill/strength we did deadlifts and power cleans. Two more PRs for this girl! I deadlifted 175 pounds which is a 40 pound PR and cleaned 115 pounds, which is a 20 pound PR. I only used 65 pounds for the shoulder to overhead in the wod. Finished in 5:41.
2. Hubby went to Cactus crossfit while he was in AZ and did a drop-in workout. He represented well by PR’ing his overhead squat, doing 70 pound kb swings and stringing together lots of double unders!
3. Tuesday: I showed up for another morning workout because I had class Tuesday night and I almost turned around and walked out when i saw TTB were in the workout AGAIN!  This was a tough wod. I finished in 13:35.
4. Wednesday: Hardest workout in a while. We worked on hang squat cleans and I got up to 105 pounds. For the workout I used 85 pounds and let me tell you, I almost stopped and stripped down the weight. My legs were on FIRE. But I toughed it out and finished in 9:29. 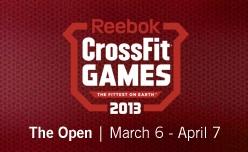 Thursday: What I should have been doing- taking a rest day. What I did instead? The first workout of the Crossfit Open.

There are over 120,000 people registered for The Open worldwide. One new workout is announced each week for 5 weeks. You register for The Open and then after each workout is announced, you do the workout at an approved crossfit affiliate gym, or videotape yourself doing the workout and submit it online to be judged. Everyone all over the world posts their scores and after the 5 workouts are complete, the top competitors advance to regionals. Regionals are where you qualify to go to the actual Crossfit Games.

Clearly I’m just doing it for fun. I’m certain there’s going to be a workout I can’t even do because of the skill or weight required…but it’s still fun to be part of it. What’s even cooler is that one of my coaches is a crossfit superstar. Check out this article about her! She finished in the Top 25 at The Crossfit Games last year and is hoping to get first at regionals and seriously compete for a medal this year! It’s pretty awesome to have her as a coach and to get to cheer her on!

So anyways, they released the first workout (called 13.1) on Wednesday night. You could watch it be revealed online and then they had two of the top male Crossfit competitors do the workout live, just after it was announced. To give you a little perspective, the first workout last year was “as many burpees as you can do in 7 minutes.” Ridiculous right? Well this year’s first workout is even harder! Here’s what is was: 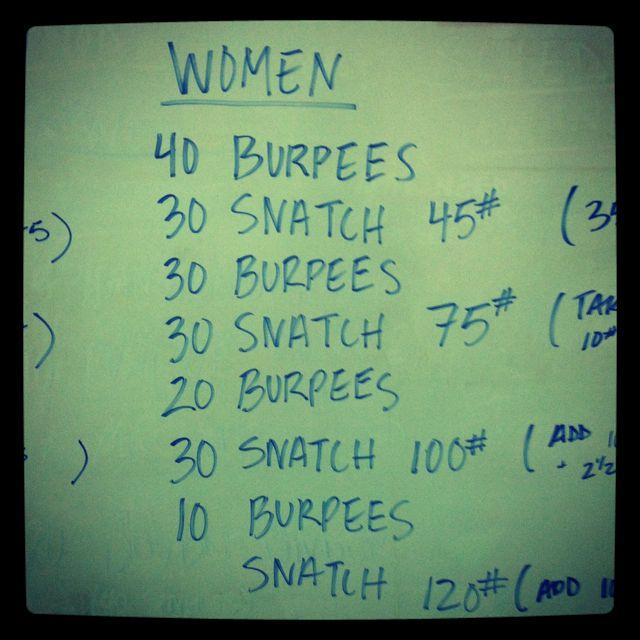 Crazy right?! Burpees suck and snatches are probably the hardest olympic lift to master. My goal was to get through the first 40 burpees, the 30 snatches at 45 pounds, the next 30 burpees and then to at least get a few snatches at 75#. I knew that would be a PR for me. The most I’d ever snatched was 60#. 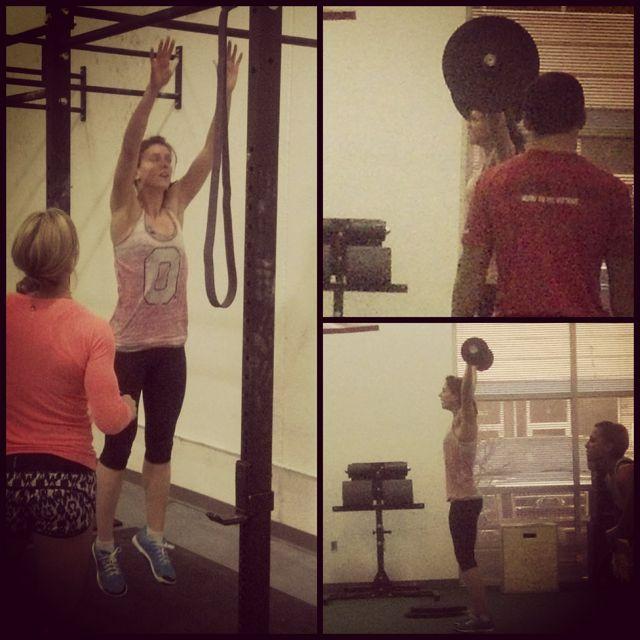 Well guess what?! I did it! I got through the first set of burpees, the first set of snatches and then second set of burpees. Then we had to change our own weight. By the time I got the bar set up for the 75# snatches, we were 11 minutes into the workout. That meant I had six minutes left to get as many snatches as I could. In those six minutes I got 7 snatches at 75#. I also had about 20 failed reps 🙂 My form wasn’t pretty, but I’m proud of the ones I got!

Oh, and prior to the workout I had a little one on one coaching session with this guy: 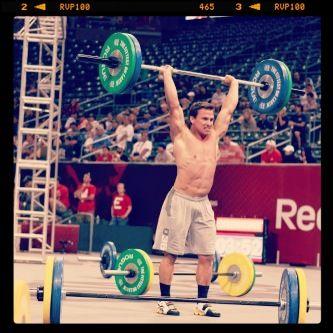 I had no idea who he was…just thought he was a random coach visiting our box. Turns out he’s Josh Bridges, the freakin’ runner up at the 2011 Crossfit Games!!! He’s also a Navy Seal. Sooooo…he’s pretty much a badass. And i’m pretty much clueless 🙂 Hubby, on the other hand, recognized him right away because he’d seen him on ESPN. But he didn’t bother to tell me he was famous while were there, or I would have gotten a picture with him!

Whew! Now you’re all caught up. Today is most definitely a rest day. I’m still deciding if i’m gonna try workout 13.1 again to see if I can improve my score or not. We’ll see!